Fitzhenry & Whiteside (2018)
Author and former MP Dennis Gruending chooses dramatic speeches from 11 of Canada’s finest political orators. He probes the historical context of each  and the rhetorical techniques used by speakers to win over audiences. Speeches That Changed Canada can be purchased directly from  Fitzhenry & Whiteside.  It is also sold by the Chapters-Indigo chain and by independent bookstores. It can also be ordered from Amazon.ca.

A provocative exposé of the competition between religious progressives and conservatives for power and influence in Canadian politics during the years of Stephen Harper’s Conservative government.

“Dennis Gruending brings both insight and hands-on experience to that fraught crossroads where faith and politics intersect . . .” – Marci McDonald, author of The Armageddon Factor

“…well informed observations on the role of faith in politics, and the politics of faith, an insightful guide to the current political landscape.” – Rev. Bill Blaikie, former MP.

Available from: Amazon and the author

Truth to Power: The Journalism of a Benedictine Monk 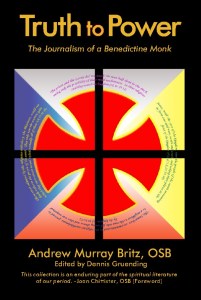 Introduced and edited by Dennis Gruending, this book presents the best from twenty years of provocative journalism by Father Andrew Britz, editor of the Prairie Messenger, a prophetic weekly news journal published by Benedictine monks in Saskatchewan for more than 100 years.

“This collection is an enduring part of the spiritual literature of our period. — Joan Chittister, OSB, Erie, Pennsylvania

“How refreshing it is to discover this collection of editorials skillfully assembled by the journalist and biographer Dennis Gruending . . .” — Michael W. Higgins, Sacred Heart University, Fairfield, Connecticut.

A revised and updated edition of Dennis Gruending’s 1985 biography of Emmett Hall, a Supreme Court Justice and the Royal Commissioner who recommended Medicare for Canada. Introduction by the Honourable Roy Romanow, former Premier of Saskatchewan.

“Gruending has written in a clear and lively style that praises a notable life without turning his book into a panegyric.” — Reginald Stackhouse, The Globe and Mail

Gruending has written a lively and highly readable story of a remarkable man.” — Toronto Star 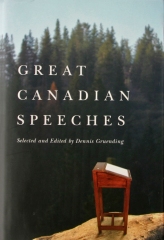 A national bestseller and a thought-provoking collection of 78 fine Canadian speeches, among them: Sir John A. MacDonald making a case for Confederation, while Joseph Howe argues against it;  Louis Riel pleading his case to a Regina jury in 1885;  Nellie McClung demanding the vote for women;  Dr. Norman Bethune urging Canadians to support the Republican cause in Spain;  Pierre Trudeau and Rene Levesque facing off in the 1980 Quebec referendum;  Thomas Homer-Dixon pondering Canada’s future in an increasingly unstable world;  David Suzuki addressing environmental challenges;  Justin Trudeau’s “Je t’aime papa”; Stephen Lewis on AIDS and the west; and many more.

“A history of Canada as seen from the podium.” – Paul Gessell, Ottawa Citizen.

The Middle of Nowhere: Rediscovering Saskatchewan

A selection of the best non-fiction writing about Saskatchewan from the fur trade to the 1990s.

“A splendid collection of non-fiction pieces on Saskatchewan.“ — The Globe and Mail

Promises to Keep: A Political Biography
of Allan Blakeney 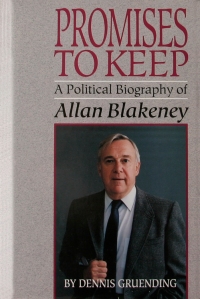 The inside story on former Saskatchewan Premier Allan Blakeney: his use of Crown Corporations, his takeover of half the potash industry, and his battles with Pierre Trudeau in the 1980s’ constitutional wars.

“Promises to keep is a sympathetic and detailed treatment of Blakeney.” – The Globe and Mail.

Available from: Amazon and from the author

The story of a Saskatchewan boy who graduated from law school with John Diefenbaker and went on to become an outspoken jurist, a father of Medicare, a defender of Indigenous rights, and the conscience of a nation.

“A number of crucial factors have gone into making Canada the nation that it is today: the Rockies, the St. Lawrence River, and Emmett Hall.” – Journalist Walter Stewart 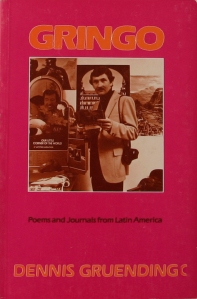 A book of poems and journals based upon Dennis Gruending’s solitary eight-month journey through Latin America, much of it on buses, during a tense and violent time.

“Gringo is a personal book. It consists of one man’s adventures and impressions, and that is the source of its strength.” – The Globe and Mail

Available from: Amazon and from the author

Emergencies Act, right thing to do